In November of last year we issued our first warning that the law would be changed in order to regulate some of the electric scooters which are becoming increasingly popular in Spain. Despite the first set of restrictions being implemented, it would appear that some people are still choosing not to believe the official information, and that is now leading to prosecutions as a result.

Although many of these vehicles look similar in their size and shape, it is not necessarily based on their physical characteristics, but their power capabilities. The first restriction that the law has controlled related to electric powered vehicles which are capable of exceeding 25 kilometres per hour, of have power in excess of 1,000W.

There are still advert which are promoting the vehicles, saying that you do not need a licence. For these larger scooters (we will use the term scooter as a generic way of describing the vehicles) some of these adverts are misleading at best as it is not true for the higher powered vehicles. In the recent legislative change, if you have a vehicle which is capable of exceeding 25 km per hour, or has more than 1,000 W in power, then it is now classed as a moped, in the same was a microcar is. You will have seen those very small cars with a moped number plate on the back. 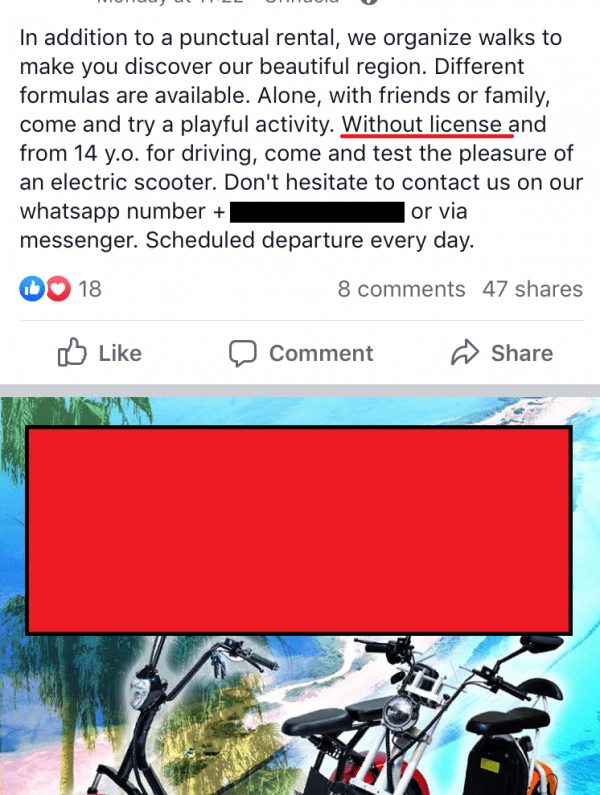 If the scooter or electric vehicle can exceed 25 kilometres per hour, or exceeds 1,000W in power, then it must be of a type approved for use in Spain, and must be registered. That means it will then be given a number plate the same as a moped, or a microcar, and will be issued with an ITV card as well as vehicle log book. The electric scooter must then undergo an ITV test once it is 3 years old, then every 2 years, just like a moped.

The person riding the scooter must also be in possession of a full licence for a moped (category AM), for which a car licence (category B) is sufficient, and must also have mandatory insurance.

The rider is also obliged to wear a crash helmet, which must be a type approved for riding a moped or motorbike, not just a cycle helmet, and can only ride the scooter on the road, and lights are of course mandatory, as well as other physical minimum standards which will be checked and approved in the original process.

The rider is also not allowed to carry young children as passengers, and will be subject to all the laws concerning driving, including the use of alcohol or drugs, or using a mobile phone.

Last week, we saw the first campaign carried out by local police officers, these based in Lepe, who had been inspecting electric scooters in some areas, and in some cases they have confiscated the machines.

The first case has now reached court and has been treated as a criminal proceeding, rather than administrative. Driving a vehicle without a licence does now constitute a criminal offence, and so it will be dealt with through the courts. This is the same reason why some drivers who are unaware of the fact fall foul of the law and get arrested for simply not carrying their original licence with them when they drive in Spain. If you are unable to prove you have a licence at the time of being stopped and questioned then the responsibility is on the driver to prove this be getting the licence to the police, often resulting in the driver spending a night in the cells in the meantime. 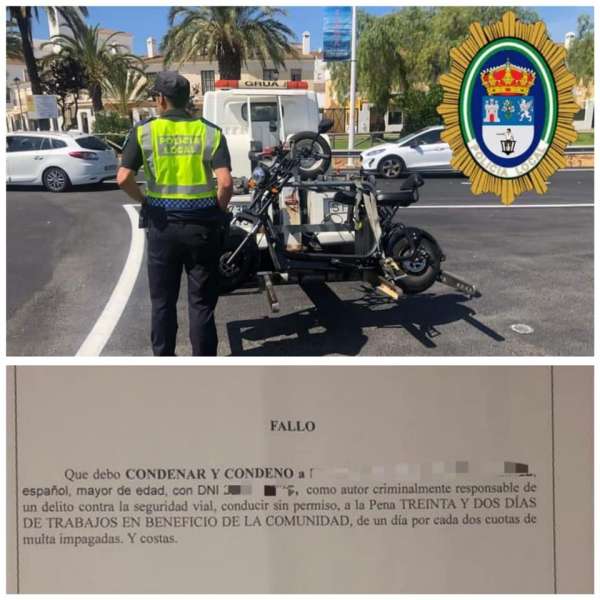 In this recent case in Lepe, there was no doubt under the law that the vehicle required registration, insurance and corresponding documentation, and that the driver was required to be in possession of a licence for the vehicle, and so the case proceeded as an offence of driving a motor vehicle without the corresponding administrative authorisation. In this case, the minimum licence would be a category AM licence, although a category B also permits the driving of the scooter on the road.

The driver, identified with the initials FJGR, was therefore found guilty of the offence and sentenced to 32 days of community service, as well as liability for the costs of the court case.

Although this was the first case to reach the courts, it will not be the last, and should serve as a warning to anyone who has or is considering buying or hiring one of these scooters. If they are capable of more than 25 kilometres per hour, or exceed 1,000W in power, then it must be of a type approved for use in Spain, and must be registered. That means it will then be given a number plate the same as a moped, or a microcar, and will be issued with an ITV card as well as vehicle log book. The electric scooter must then undergo an ITV test once it is 3 years old, then every 2 years, just like a moped. 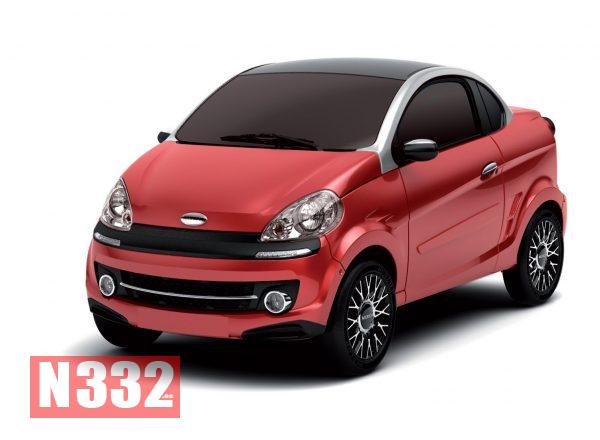 The rider must have a driving licence for category AM (mopeds) or B (cars) and insurance is mandatory, as is the wearing of properly approved safety equipment suitable for a moped, because the vehicles are classed in the same group, they are simply mopeds powered by an electric motor.