February 03, 2023
Home F.A.Q. When will warning triangles be replaced?

Warning triangles have been mandatory in Spain since 1999. However, this device has its days numbered, being replaced by an alternative, safer to operate, electronic warning system. 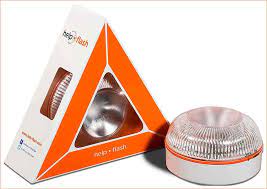 Known technically as the V-16, a flashing orange warning light can now be used instead of warning triangles in the event of an emergency, such as a breakdown, for example.

There are two main benefits to consider that these new flashing lights have over their triangle relatives. Firstly, they are easier to see at night and at a greater distance, and secondly, they do not require the driver to walk along a potentially dangerous road in order to warn of the scene.

With the new lights, you simply switch them on, and then place them on the highest point of the vehicle, most likely the roof, then get yourself to a place of safety, of course, still wearing your high visibility vest, which will remain mandatory.

As these new devices are developing, the more modern versions, which the DGT says will shortly be available in stores, will also have geolocation abilities, and will ultimately be able to communicate with live mapping services, thus providing a greater warning of the presence of a hazard.

Although these new devices can be used now instead of triangles, after a change in the law in July 2021, they will become mandatory in the future. As from 1 January 2026, the warning lights will completely replace warning triangles in Spain.

As of that date, the only way allowed to signal breakdowns or incidents will be the V-16 signal, with its geolocation, thus, as mentioned, ensuring that a report of the vehicle reaches the DGT 3.0 website in a timely manner. In turn, this information will be forwarded to other drivers on the road.

Among the additional advantages of this new system is its optical system that allows a fairly wide field of visibility. That is, up to 360 degrees horizontally and a minimum of ±8 degrees up and down. At the same time, it has a light intensity that can be maintained for 30 minutes.

If you have one of these devices already, and when you do obtain one in the future, it will become important to add the checking of the light to a regular routine, as they are battery powered, and so it is important to make sure they function in case you need to use it.