They are sometimes considered daunting, confusing, frustrating and dangerous, but in actual fact, if used correctly, roundabouts are designed to improve the flow of traffic at busy junctions. 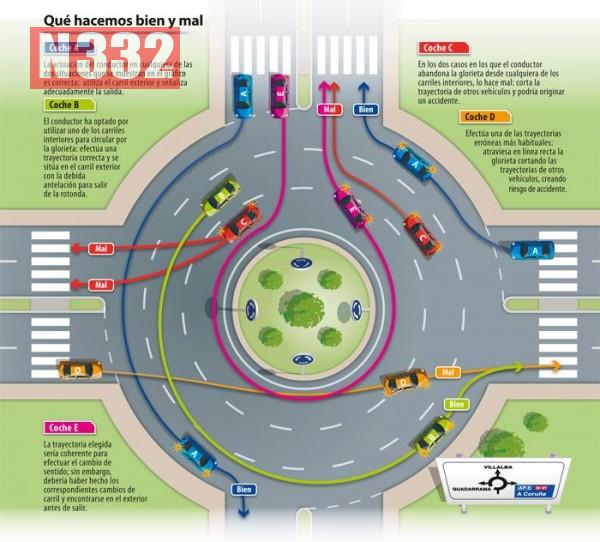 For foreign drivers in Spain, the idea of driving on a roundabout is even more confusing, not necessarily because they are particularly different, but with so many vehicles seemingly following their own rules, and in areas frequented by tourists who may not be as used to the road as the native drivers, all of these factors combine to create a nightmare for many.

However, if we break down the process of driving on roundabouts, we can actually get a better understanding of how they are intended to be driven on, and, therefore, realise exactly what should be going on.

We probably already realise that we have to give way to traffic already on the roundabout, but for now, we are not going to look at the approach to roundabouts, or for that matter driving on them, but we are going to look and examine the situation where most roundabout incidents take place, during the process of exiting the roundabout onto another road.

Firstly, we need to consider three basic principles, two which we know, and one which we may forget, all of which are crucial in our understanding of how we should exit a roundabout.

Firstly, in Spain, we drive on the right. In fact, we should drive as far to the right as possible, subject to any factors which may prevent this. This rule applies irrespective of how many lanes there are on a road, the right hand lane is considered our normal driving lane.

Secondly, although they are classed as a special intersection, roundabouts are treated just like any other road. Albeit a one way street, but a normal road none the less, irrespective of the number of lanes, a roundabout is nothing more than a normal, curved road, with junctions.

The third principle we must be aware of is that, under normal circumstances, we should always exit the roundabout from the right hand lane, the outer lane, unless signs or signals tell us otherwise.

Having established those three principles, let us now move away from roundabouts and consider a normal, straight road. Imaging a road that never ends and is a straight line, with no curves, but it does have junctions. We can consider it to be a one way street to make it easier.

As we drive along this road, there may come a point when we want to turn right, at a junction. As we drive along the road we know where we want to turn and we carry out our procedure we learnt when a novice driver, mirror, signal, manoeuvre, perhaps even remembering position, speed and look, and we turn right from the major road to the minor road.

This procedure is something that we do countless times during any normal drive.

Now, let us consider that we are driving along the same straight one way road, although this time it has two lanes. We still want to turn right, and so think for a moment what would the procedure be?

The procedure is of course exactly the same, the only difference being that if we are in the second, left hand lane for some reason, lane 2 as we will call it, we would normally move back into the right hand lane, lane 1, before we exercise our procedure to turn right.

It would never normally cross our mind in this situation to cut across the path from lane 2 to lane 1 in front of another vehicle, as this is quite obviously a dangerous move, particularly if the vehicle in lane 1 is continuing straight ahead.

We think back to our first basic rule, we always drive on the right.

Now let us transpose this situation onto another type of road, this time the road we are on is not straight, but rather curves to the left, constantly. Other than that, the features of the road are the same, it has junctions and it has more than one lane.

Supposing we are driving along this long curved one way street and we wish to turn right, think for a moment, would the same procedure apply?

The answer is yes, it would. Under normal circumstances we would be driving in the right hand lane, or normal driving lane. If we wish to turn right, we exercise our right turn procedure as we approach, including mirror, signal, manoeuvre, position, speed and look, before we turn from the major to a minor road.

In the event of us being in lane 2, would we cut across the vehicle in lane 1? No, we would first exercise a procedure for us to return from lane 2 to lane 1 and then exercise our right turn process.

Now, if we look back at our second general rule, we must consider that roundabouts are treated just like any normal road, albeit a one way street. In other words, a roundabout is exactly the same as the situation we have just described. Now reinforced by the third principle we looked at in the beginning, that we would normally exit a roundabout from the right hand lane.

Let us look at how we put all of this into practice on a roundabout. Remember, we are not concerned about the approach or process of the roundabout itself, but the procedure for exiting.

If we are on the roundabout and wish to exit at the first junction, we would do so exactly the same way as we would on either our long straight road, or the curved one we described. In fact, this procedure is the same for the second, third or fourth exit, it is the same procedure for any exit in fact, we should normally be in the right hand lane before exiting, and would signal with a right turn indicator before leaving the roundabout.

Although we are not looking at what we do on a roundabout, there are two points we must look at. The first one if that the lanes are marked out for a reason, and so we must follow the lane markings, not cutting across the roundabout, just like we wouldn’t normally cut across lanes on any other road.

Secondly, we may well find ourselves not in the right hand lane, just like we might find ourselves in lane 2 in the previous example. Does that mean that we can cut across in front of other drivers in order to exit the roundabout? No, it does not, in exactly the same way we shouldn’t cut across a vehicle on our straight road. Remember, our third principle is that we should, under normal circumstances, always exit the roundabout from the right hand lane.

The DGT answers the question, “Can I exit directly from the inside lane?” with the response “no”, unless the movement within the roundabout is channelled through suitably marked lanes and road markings: in this case, the exit could be made from the inner lane and the right. Although, remember, if the outside lane was not busy, the rule requires you to use it. If the outside, normal driving lane is occupied, then the general principle of security offered this type of infrastructure is that the exit should be from the outside lane, you must not stop in the middle of the roundabout waiting to be let by, nor should you cut in front of other road users in the outside lane, remember the rules of priority and try to move into the correct lane early enough.

What about indicators? Well, once again, that question could also refer to any other road. In our first example of a long straight road, would we indicate to show other road users our intention to turn right? Yes, of course we would, it is part of our procedure, under normal circumstances. But on the straight road, would a vehicle indicate that they are not intending to turn and are in fact going straight on? The answer to this one is no, not normally, and on roundabouts the DGT say that it is not a requirement, however, it is often advised to implement what we describe as a “courtesy indicator”. There is no requirement to indicate that we are going straight on, but as the roundabout often requires quicker responses to movements, indications that we are not turning off, by using our left turn indicator, can be considered courteous and affirms our intentions.

There are some people who say that there is not enough time to do all of this on a roundabout, but as any driving instructor or professional would tell you, when it comes to driving, there is one way in which you can give yourself more time, that is to slow down.

If we put our three basic principles into practice, we will soon see that the process is slightly less confusing than we might have thought. Always drive on the right, under normal circumstances, and always exit a roundabout from the right hand lane, unless signs or signals tell you otherwise.