It is mandatory to carry your driving licence with you when you drive a car in Spain.

The document also serves as an identity card and so there are benefits to having it with you other than the fact it is mandatory, however, there are occasions when we may forget to carry it or choose to leave it at home, neither of which is a valid excuse by the way.

If you do forget to take your licence and you are stopped, there is a fine which is applicable, however the situation can get far more serious.

Driving without a licence is a criminal offence in Spain, with the burden of proof being on you, the driver. So, in the event of you getting stopped and a traffic officer asking to see your licence, you are responsible for producing it. If you are unable to, for whatever reason, it is likely you may find yourself arrested and possibly even spending the night in the cells until you can convince somebody to bring your licence to the police station to prove your entitlement.

The same situation applies if you are driving a vehicle which your licence doesn´t cover. An example of this has been seen in publicity for so-called microcars, which states “no licence required”. The claim is simply not true. It is correct that you can drive a microcar without a car licence, but you must have a moped entitlement. On the opposite end of the scale, we wouldn´t expect a regular car driver to get behind the wheel of a double decker bus without first passing a test for the vehicle in question.

However, there is a way in which you can leave the originals in a safe place, such as at home, if security is a concern and you don´t want to carry your original licence with you. You may take your original documents to a Notary and they will take a copy for you and add their original stamp, confirming their validity and originality.

It is not simply a case of photocopying them yourself, even if you copy them in colour and perhaps you even laminate them, they are still copies which are not valid as they are not certified by a Notary.

Most towns will have a Notary office and many of them speak English. It is a recognised service and so they will fully understand what you want if you take your documents to them. The other good news is that it doesn´t cost a lot for them to provide these certified copies, so if you do want peace of mind of leaving your originals locked away safe, then you visit your local Notary and have them provide you with certified copies. 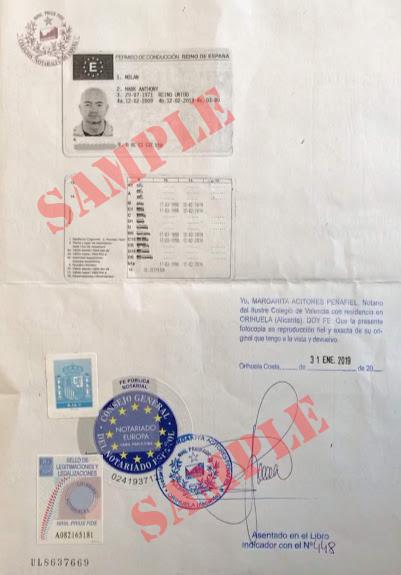 Remember, it is mandatory that the documents you carry are the originals, not photocopies. The only copy that is allowed is one that has been stamped and certified by a Notary. Notarised copies of documents are allowed, but that is the only exception.