The Guardia Civil has taken to social networks to share a French police produced videos about the risks involved in warning other motorists about the presence of check-points. 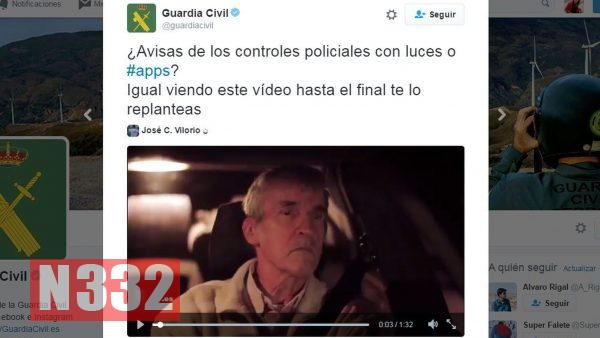 The message of “nothing to hide, nothing to fear” has never been clearer than in recent times, with both an increased threat in criminal and other serious activities, protection of law-abiding citizens has perhaps never been as important.

Let´s remember, that if you do have nothing to hide, if you are stopped at a checkpoint, the worst that will happen will be a slight delay whilst your documents and details are checked. More likely you will simply be waved on and able to go about your business.

In the video however, a very different story unfolds. A driver is seen driving through the night when he spots a police patrol. Thinking he is doing a good deed, he takes to flashing his headlights in warning to oncoming vehicles, a practice which is by the way illegal.

As the story continues we see another more nervous driver heeding the warning, stopping his vehicle and turning around to drive in the opposite direction.

Unbeknown to the original driver, the police that he had spotted originally were involved in the search for a young girl who had been abducted. The driver he is later seen to warn is revealed to be the abductor, so close to approaching capture and the subsequent liberation of the girl, the warning meant that the kidnapper was able to evade capture, the result for the victim unknown, but without the warning of the driver the story would have ended so very differently, with a positive result.