It was over a year ago that foreign resident drivers were first warned of the need to change their driving licences if they did not fall into the required criteria as set out in the countless publications detailing this.

The European Union is responsible for creating a harmonised licence model with the new rules coming into force last year. However, on account of the number of foreign drivers living in Spain, the DGT issued an amnesty in March, allowing those drivers who would be liable to a fine until the 1st of January 2016 to sort out their documentation.

There were two such instances which required action. Firstly, if your licence has an indefinite expiry date, or more than 15 years validity and you were legally resident in Spain before January 19, 2013, you should have already renewed your driving licence. If not, you must do so immediately. If you only became resident after January 19, 2013, you had 2 years from your date of residency to renew, that date has also expired.

Secondly, if your license has expired or is due to expire, you must renew it in your country of residence, in other words, if you are a resident in Spain, your current license, once it expires, must be renewed in Spain.

Despite these explanatory cases, there was still a lot of erroneous advice being spread through some outlets, including incorrect reports that you do not have to change your licence as we are all in Europe, suggestions that the whole process was illegal and even some people adamant that the Guardia Civil would not fine drivers. All of these suggestions were wrong.

This week, in the Torrevieja area, one such foreign driver has been issued with a fine as the licence, which fell into the first category of having an open expiry date, had not been changed. This licence is no longer valid and the amnesty expired in January.

You can see the details of the fine issued in the image below. 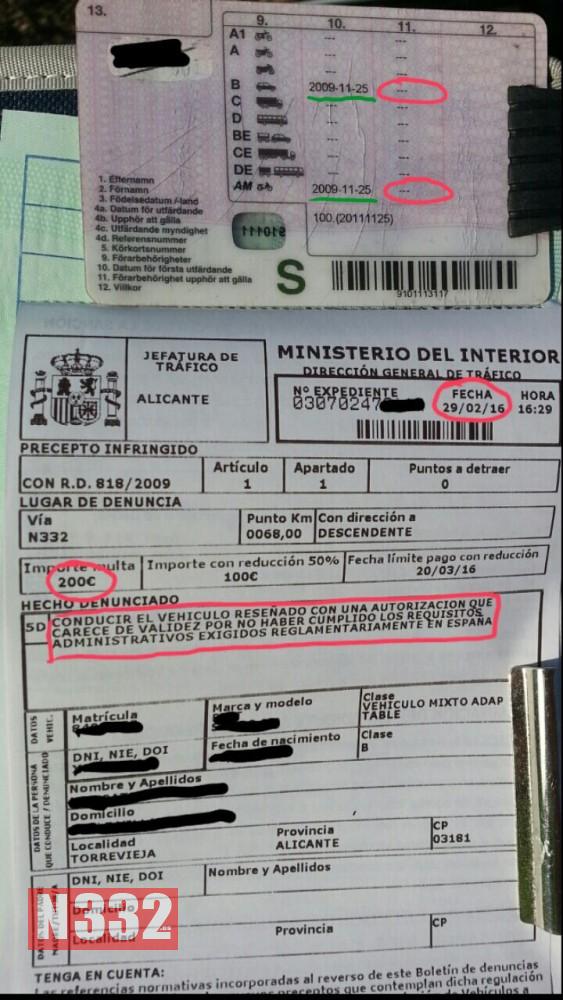 Remember, if your licence has an indefinite expiry date, or more than 15 years validity, your licence must be changed. If, or when, any licence expires, it must be renewed in your country of residence.

It may seem like a daunting process, but we can help. N332.es work with other professionals who work in the field of driving, licencing and road safety. Through our partnerships with other businesses we are able to offer an increasing range of services.

We can arrange for one of our partners to assist you in the process of exchanging your UK driving licence for a Spanish one. Remember, your driving licence must be issued in the country where you reside, so if you are a resident in Spain, you must exchange your licence. You don´t have a choice, it is not something that can be ignored as you will be fined if you are caught.

In fact though, having a Spanish issued licence also makes life on the road much easier, as your Spanish licence is linked to your NIE, and so in the event of you being stopped by the police your details can be checked and confirmed instantly. Plus, in the event of you being fined for a traffic offence, you do not have to pay on the spot if you have a Spanish licence, and can benefit from a reduced fine for prompt payment.

If you would like more information about exchanging your licence, fill in the form on the page by clicking this line of text and one of our team members will get back in touch with you shortly.

You can also search the n.332.es website by keying in the keyword “licences” at the top of the page.