This is the first of a wave of reforms intended on reducing the number of injury and fatal incidents on the roads, and is effective on some 7,000 kilometres of the secondary road network. 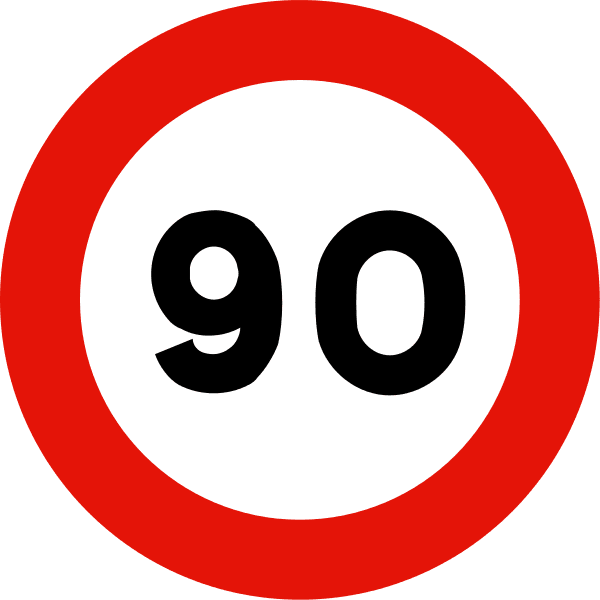 This is in effect the same concept as the commonly referred to “National Speed Limit” which is in place on British roads, where a maximum is automatically set on roads outside of towns.

From Tuesday 29 January, 2019, the maximum permitted speed on the secondary road network is 90 kilometres per hour, for cars, motorbikes, small motor homes and pick-ups., as well as buses (except under certain circumstances), derivatives of cars, and mixed adapted vehicles.

In Spain, speed limits are dictated by three elements, the road, the vehicle and the driver (in some cases). Therefore, some vehicles are still restricted further, such as trucks, vans, large motor homes, articulated vehicles, vehicles towing a trailer, and others not listed, which are restricted to a maximum permitted speed of 80 kilometres per hour on these roads.

Bicycles and mopeds are restricted to a maximum permitted speed of 45 kilometres per hour.

Remember, we are talking only about the secondary road network, where no other restriction is in place, so if there is a sign saying that the maximum permitted speed is 80, or 50, for example, then that is the case.

Similar vehicular restrictions are also in place on motorways, as we can see from the table. It is important to know what classification your vehicle is, if it´s not so easy to identify such as is the case of cars or motorbikes, and you can find that information on your documentation. 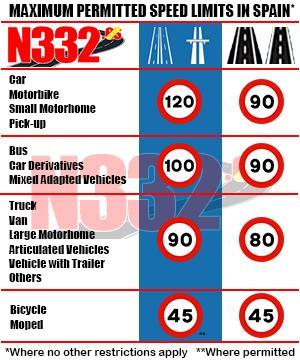 Some drivers are also restricted such as may be the case those suffering certain medical conditions, for which the doctor has determined a restriction is necessary.

Prior to this change in the speed limit there was some confusion as some roads had different limits depending on their physical characteristics. This change aims to simplify the concept as there is now a uniform maximum permitted speed outside of towns, again, in places where no other restriction exists.

Reducing the speed limits on these roads has not been without controversy, with a number of people voicing their complaints about the reduction, this being the first of many reforms we will see this year.

However, if we look at the reason in a different way, we might see why it is necessary. For example, imagine that every single day around 35 passenger jet airlines fell from the sky, killing everyone on board. Every single day, 35 planes, carrying an average of 100 passengers, crashed. Imagine if that were the case. Not only would so many people simply refuse to fly, there would be outrage that governments are not doing anything to stop it.

The reality is, although we can be thankful that 35 planes per day are not crashing, that is the equivalent of the number of people being killed on the roads around the globe.

Before the end of January this year, more than 100,000 people have been killed on the roads around the world. That is the equivalent of 35 passenger jets crashing every single day, and yet, when action is taken to try to reduce this figure, some people see the need to complain.

This is the reality of road safety, the fact that too many people are losing their lives or being injured, every single day, and so long as we, the drivers, collectively fail to make the roads safer, then we can and should expect more legislation which is ultimately aimed at keeping us all safer on the roads.