The new Traffic and Road Safety Law approved this year imposes more severe punishments for certain behaviours that are considered to have a greater risk for road safety and increases the points that can be deducted from us for committing infractions such as carrying the mobile in hand while driving, not using the seat belt, helmet or child restraint system, and throwing objects that can cause fires onto the road.

Since 2006, the year in which the points system came into operation in Spain, each driver starts with 12 credits, which are subtracted as they commit infractions. Novice drivers and those who obtain a new licence after it has been withdrawn start with 8 points. In addition, if no offences are committed in three years, two more are added to the initial points. And in another 3 years without being sanctioned, another point is added, up to a maximum of 15.

If you want to keep all your points, it is worth knowing what the infractions are for which the DGT can take them away from you and the fines you will have to pay if you commit any.

Points are lost for committing a serious or very serious infraction. They can take from 2 to 6 points, depending on the severity of the offence. Since the point permit began to operate, the offences that have caused drivers to lose the most credits are speeding, not wearing a seat belt, the use of a mobile phone while driving and the consumption of alcohol and drugs.

As a general rule, you cannot lose more than 8 points in a day, but there are exceptions, in the case of very serious infractions, which can leave you with zero in a single day. Among these infractions are: driving with high levels of alcohol or drugs or refusing to take tests for their detection, exceeding the permitted speed by more than 50%, driving recklessly, carrying a radar inhibitor in the car, circulating in in the opposite direction, carrying out unauthorised races, and failing to comply with more than 50% of the mandatory driving and rest times, in the case of being a professional driver.

The most serious offences are punished with the withdrawal of 6 points and fines ranging between 200 euro and 6,000 euro. The DGT reminds us that economic sanctions are generic and can be revised upwards in certain cases, such as in the case of repeat offenders, and can even be considered a criminal offence.

Reckless driving, driving in the wrong direction or participating in unauthorised races or competitions (€500 fine).

Driving vehicles that have radar inhibitors, speedometers or any other similar device installed. (Fine of €6,000).

Manipulating or collaborating in the manipulation of tachographs or speed limiters (€500 fine).

Holding a mobile phone in your hand while driving (€200 fine).

Throwing objects onto the road that could cause fires and accidents (€500 fine).

Overtaking cyclists without respecting the minimum distance of 1.5 metres or hindering their progress (€200 fine).

The infractions that subtract 4 points are punished with a fine of 200 euro in general, except for driving without a licence, which has a financial penalty of 500 euro.

Failing to stop at a stop sign, failing to give way or running a red light (€200).

Not respecting the signals and indications of the agents of the authority or of the variable message panels (200 €).

Failure to use or improper use of the seat belt, helmet or child restraint system (€200).

Driving without having the proper driving licence or permit (€500).

Driving with a suspended licence or being prohibited from using the vehicle you are driving (€200).

The infractions that subtract three points also carry an economic fine of 200 euro in general.

Driving with helmets or headphones, carrying the mobile between the helmet and the head, manually manipulating the navigator or using the mobile (as long as it is not with the hands-free system) (€200).

Excessive speed: from 2 to 6 points

Two out of every three penalties imposed on interurban roads are directly related to excessive speed, which is present in one out of every five traffic incidents with victims. For this reason, exceeding the limits is considered a serious to very serious infraction and is punished with the subtraction of 2 to 6 points and fines ranging from 100 to 600 euro. 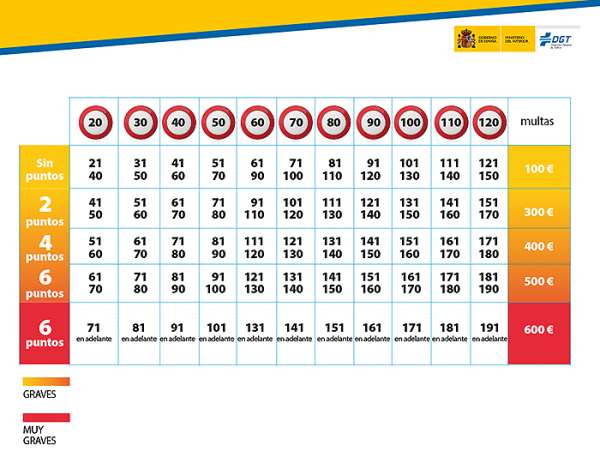