December 06, 2022
Home F.A.Q. The Modernising of the Roadside Warning

Hopefully, we all know by now that there are certain items which are mandatory in vehicles. Spare wheel and tools to change it (or emergency repair kit that some modern cars carry), high visibility vests, and two warning triangles are the main items, but times are changing and warning triangles are in the process of being replaced.

Naturally, we hope it never happens, but if we do suffer a breakdown, or other incident on the road, it is crucial to protect ourselves (high visibility vest) and the scene (warning triangles). However, in attempting to offer that protection, by warning other road users of the situation, there has been far too many deaths, people who have been killed in the process of putting out warning triangles.

As a result, the DGT has set about replacing these triangles with a warning light which can be fixed to the highest point of the vehicle, such as the roof, and emits a warning light to warn other road users of the danger. These lights are available now, but if you haven’t bought one yet, it might be prudent to wait a little while longer, for reasons we will explain shortly. 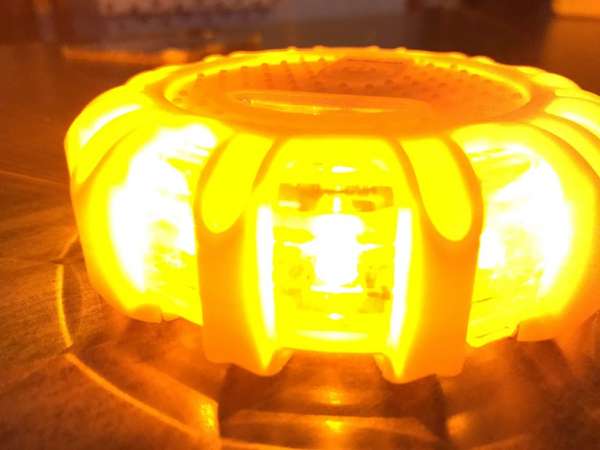 These flashing orange warning lights, technically known as the signal V16, will become mandatory for all vehicles from 1 January 2026, this completely replacing the warning triangle. You are permitted to use them now, replacing the triangles, but it is on that date that every vehicle must carry them, and use them in an emergency.

There are differences in these lights. Some are visible from about 1,000 metres away, providing better protection, the greater the distance from which they are visible, the better. The price range is currently between about 15 and 30 euro, with the average price being 25, although when it comes to safety it is better not to compromise on quality, so shop around for the best option (but maybe not yet).

If you have already bought one of these lights, well done, you have taken a huge step in offering better protection in the event of an incident. But if you haven’t, you might be better off, as the next stage for these lights is for them to include geolocation equipment, which will enable the V16 light to transmit your location to the DGT, thus allowing your actual location to be recorded on their incident map and warning other road users remotely of the incident before they arrive at the scene.

According to the DGT, these lights with geolocation should start to go on sale in Spain in December, hence the reason why it might be worth waiting a little while. We don’t yet know the price, although they will inevitably be more expensive than the current models.

In the meantime, it is important to know how to use warning triangles. Make sure you are wearing your high visibility vest before attempting to place the triangles on the road. You must then place your warning triangles in such a manner to provide sufficient warning to oncoming vehicles.

Ordinarily, you must place your triangles 50 metres away from your vehicle, so that they are visible from a distance of 100 metres. In the event that your vehicle is after a bend or over the brow of a hill, move the triangle further away so that it is visible before vehicles reach the bend or brow.

On a normal two-way road, you must place one triangle behind and one in front of your vehicle, both at a distance of 50 metres and visible from at least 100 metres.

On a one-way road, or a road which has more than 3 lanes, such as a motorway, you only need to place one triangle at the rear of your vehicle 50 metres away and visible from 100 metres.