All roads in Spain have a maximum permitted speed limit. However, that limit not only varies depending on the characteristics of the road, but also the type of vehicle, and (in some cases) the driver.

As always when we talk about speed limits we must offer the same reminder however, the maximum permitted speed is exactly that, a maximum, it is not a target and the actual safe speed may be much lower depending on the road and weather conditions.

That said, here is the overview of the generic maximum permitted speed on the roads by vehicle type, unless signs say otherwise. 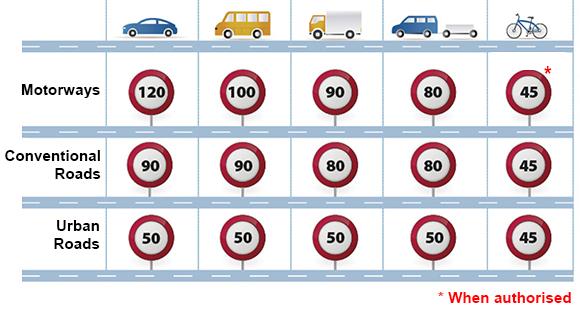 Any vehicle which falls into this category, namely a bus carrying school children and displaying the yellow school bus sign, or a vehicle carrying goods classed as dangerous, the maximum permitted speed must be reduced by 10 kilometres per hour.

Vehicles with three wheels or “quads” have their speed limited to 70 kilometres per hour on any type of road where they are permitted to drive.

Cycles, two and three wheeled mopeds and light quadricycles have a maximum speed of 45 kilometres per hour where permitted.