According to statistics, most drivers have been or will be caught out committing a driving offence at some point. The most common reasons are improper parking, speeding or even using their mobile whilst stopped at a traffic light. 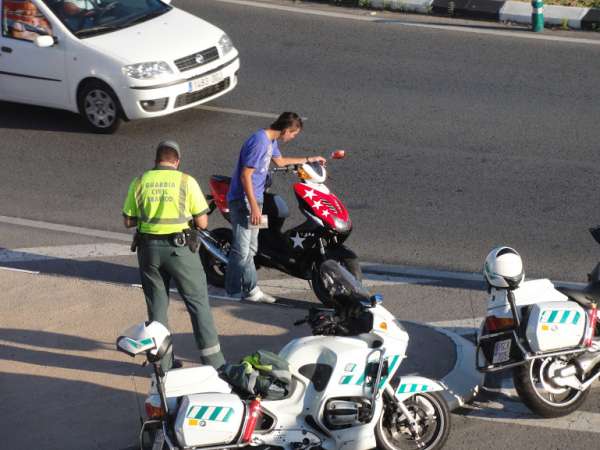 These days, many of the fines are issued remotely, with drivers caught out by one of the many cameras around the road network, r even by Pegasus on the DGT’s helicopters.

If you received a fine and it genuinely wasn’t you, perhaps you’d let someone else drive your car, or even your number plate may have been cloned, it might just be a genuine mistake by the system, whatever the reason, there is a process of contesting the fine, the details of which are published in English on the DGT’s website, dgt.es.

However, on this occasion, what if it was you but you just choose not to pay it. What then are the consequences of ignoring or failing to pay a traffic fine? We will tell you.

The first point we have to make is that there are benefits to having a Spanish driving licence, changing your UK one for a Spanish one if you are living in Spain.

If you have a UK licence and you are stopped to be dealt with for a traffic violation, you are treated as a tourist and, as such, you have to pay the fine on the spot, with a risk of your vehicle being immediately impounded if you don’t or can’t.

As a Spanish licence holder, you don’t have to pay on the spot and, even better, most fines have a discount for prompt payment . The fine is reduced by 50% if it is paid within 20 calendar days following its notification (either by hand or by postal mail). During this period of time , the fine may also be appealed , presenting the allegations and the evidence deemed necessary up to 30 days after it was received.

Now onto the  point, what if this period has passed, either inadvertently or intentionally, what happens next? After the initial time allowance, a new period known as an executive procedure begins. If no payment has been made in the voluntary period, the sanction becomes fixed and the fine will arrive with a surcharge of 5% (now without the possibility of a 50% discount). This step will be carried out automatically and without the need to notify you. You have been warned!

Once that period has passed, remember there is no obligation for you to be notified again, it is the Tax Agency who takes over the matter. They will then notify you with what is known as an enforcement order, a document indicating that the fine is applied, now with a 10% surcharge and a new payment period. If you continue with the intention of not paying, there will be a new notification, this time with a surcharge of 20% and also a new deadline for payment.

Once this option has been exhausted, the matter becomes even more serious and you will be informed that the normal procedures have not been satisfactorily settled. It is now, after a relatively short space of time, that the Tax Agency begins to seize the assets in order to settle the account, for example taking the money from your bank account. If you have no money in your account then the Tax Agency is able to obtain it through other revenue streams, such as direct from your salary or pension. If you still haven’t got enough to pay, then the next stage is for the Tax Agency to seize assets, such as real estate for example.

In short, as a Spanish licence holder, if you get fined you can often get a 50% discount of you own up and pay it promptly. If not, the fine is likely to end up doubled, taken from your bank or salary without you having any opportunity to contest it, not even on the basis of having bills to pay or needing to eat, and, ultimately, your assets could be seized, to which we conclude, if you did commit the offence it is far better to pay promptly and learn from it, not repeating the infraction again.