In addition to the ruling regarding all emergency vehicles using blue flashing lights, the Ministerial Order published at the end of July, also includes other important changes to traffic laws and regulations: 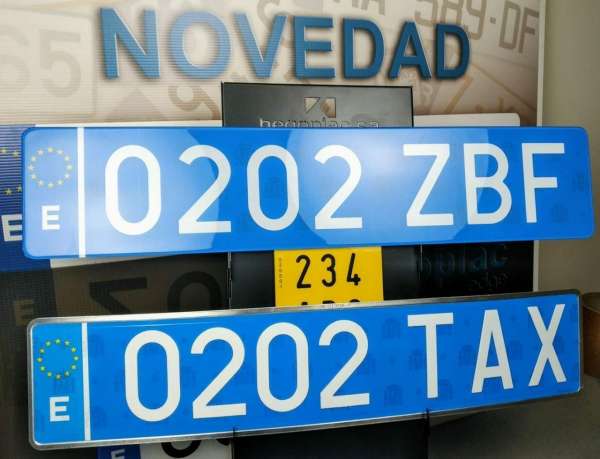 Holders of vehicles registered prior to the entry into force of this order will have a period of one year to change the current rear registration plate to the blue one. 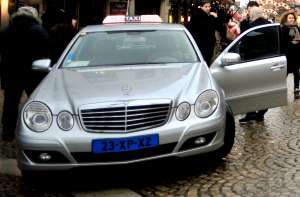 This change is driven by the approval in 2016 following the increase of intrusion and piracy in the public transport of passengers of vehicles of up to nine seats. In this proposal, then approved unanimously, the Government is urged, at the request of the collective of taxi drivers, to carry out the necessary actions to, in the shortest possible time, modifying the traffic regulations (Annex XVIII of the General Regulations of Vehicles) relative to the registration plates in order to provide a specific colour (blue) for the licence plates.

Some European Union states such as the Netherlands, Belgium and Greece already have this type of different licence plate.

Luminous device for vehicles immobilised on the road: Annex XI includes the possibility of placing on the outside of the vehicle, when it is immobilized on the road by accident or breakdown, a self-powered orange light device, with autonomous power, high visibility and that is stable on a flat surface. This new luminous device is included as an optional element, next to the existing warning triangle, which is still mandatory.

Shared Vehicle: The General Vehicle Regulation incorporates in its annex II the definition of a vehicle for shared use, a vehicle for rental without a driver that is dedicated to a concatenated and intensive use by an undetermined number of users within a defined service area. It must be available, at any time, to be used through the use of mobile applications.

The vehicle of shared use supposes a complement of the systems of urban public transport, introducing in addition a greater efficiency in the employment of the vehicle, reducing the congestion of the traffic, the occupation of the public road and the polluting emissions.

In addition, the distinctive “V-26 Sharing Badge” is established. A device that will allow public administrations, mainly municipalities, to identify this type of vehicle and adopt measures that favour its use as an alternative to the vehicle for private use and urban public transport.

Each public administration may establish the obligatory nature of the use of the shared use badge. It should be placed in the upper left corner of the windshield of the vehicle and, if it does not have a windshield, in a clearly visible place.

Environmental Distinctive: The General Directorate of Traffic has classified the vehicle fleet through strict environmental criteria, assigning each vehicle a category within the created environmental scale. Five categories of vehicles were created: 0 emissions, ECO, C, B and A. and for the first four an environmental label was designed, with the same name as the category to which it belongs, leaving category A without distinctive.

What this Ministerial Order does is to incorporate a new section in Annex II of the aforementioned Regulation, in which, in addition to the classifications of construction, use and service criteria for the vehicles registered, it is added to the Vehicle Registry the E classification corresponding to criteria due to its polluting potential.

Likewise, Annex XI “signals on vehicles” is modified to add a new signal related to the different environmental distinctions assigned to each category of vehicle according to its polluting potential, with the denomination of “V-25 Environmental Distinction”.

This distinction will allow public administrations, especially municipalities, to identify vehicles and adopt environmental measures related to traffic management. Likewise, each Public Administration may establish the obligatory nature of the use of the environmental badge.

The badge should be placed in the lower right corner of the vehicle’s windshield and, if it does not have a windshield, in a clearly visible place.

Pick-up vehicles: The definition of pick-up vehicles is introduced in the General Vehicle Regulations: vehicle whose maximum mass is not more than 3,500 kg, in which the seating positions and the loading area are not located in a single compartment.

These vehicles are characterised, for the most part, by having the peculiarity that the part destined for the merchandise is separated from the cabin and normally open.

Until the approval of this Ministerial Order and in the absence of a proper classification in the definitions of the General Vehicle Regulations, pick-up vehicles had been classified until now as a truck-type vehicle. From now on, and in order to facilitate their identification and control, they will be assigned the numerical code 17 in terms of their classification by construction criteria, for their annotation in the Vehicle Registry.