A common question that often emerges when driving in Spain relates to signs, both on the roadside, and on vehicles.

One such sign which is frequently seen is a green-backed L-plate, which is indicative of a novice driver, although now qualified, and is designed to advise other road users of that fact. 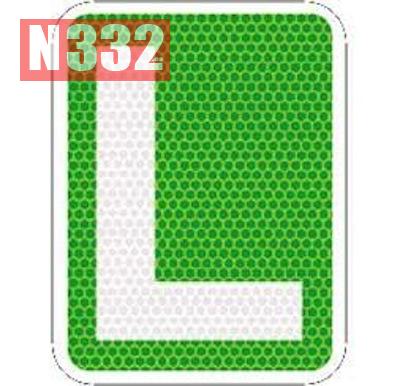 Officially known as the V-13, the L-plate must be displayed on the vehicle for a year after obtaining their permit to drive. There are one or two exceptions, but for the purpose of this article we are discussing why it would be displayed.

The laws regarding the V-13 state that the “L” plate must be displayed on the left rear side of the vehicle, in a conspicuous place, except on motorcycles, vehicles for disabled persons and tricycles, where there are allowances for the location, other than it must be on the rear of the vehicle.

Previously restricted to a slower speed than other drivers, a change in the law in 2011 meant that this no longer applied, and that vehicles displaying the sign can travel at the same speed as other road users, subject to obvious restrictions.

The other restriction relates to traffic violations, whereas a novice driver is given 8 points instead of 12 for fully experienced motorist, which are deducted should the driver be found guilty of offences relating to road traffic laws.

The overall aim of the sign is to serve as a warning to other drivers that the person in charge of this particular vehicle is a novice, and has still to build on the experiences that a future behind the wheel will bring. Caution, patience and understanding are all that is requested by those who have gained the knowledge, as well as allowing more distance and time for the driver to carry out the moves that may seem second nature to others.

Finally, in the event that a novice driver chooses not to display the mandatory sign, then the prospect of a fine is waiting for you, should you get caught out.