The summer months often increase risks when driving, not only from the road environment, but also from within the vehicle.

Sometimes, especially in the hot weather, the temptation to “relax” a little too much is greater, which we often see manifesting as feet up on the dashboard for passengers, or arms, and sometimes legs, extended out of the vehicle, but maintaining a proper position in the vehicle is not only important for our comfort, it is crucial for our safety. 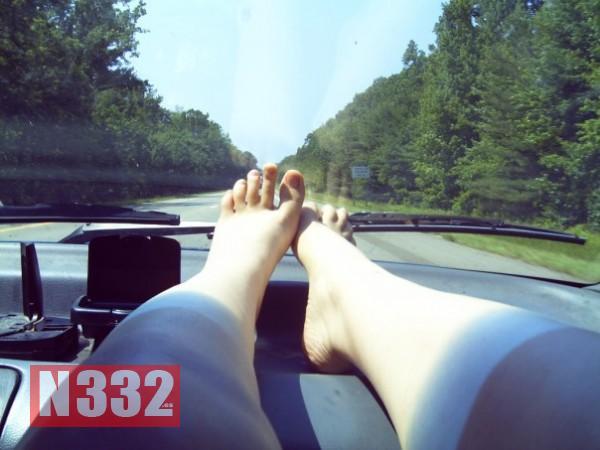 When used correctly, the vehicle´s seats and features offer the maximum protection in the event of a collision. If we do anything to change the characteristics of these features, we risk our safety tremendously.

The trouble is, it is easy to forget about the safety features when we are weighed down by the summer, but putting our feet on the dashboard, or the seat for that matter, arms waving out the windows, not wearing our seat belt correctly are all an absolute NO.

Arms and legs should be kept inside the protective shell of the vehicle. Sticking your head, arms, or legs out of the window is not a particularly good idea.

There are countless documented cases of motorists suffering serious injury when “clipped” by a passing car, as well as the more gruesome stories of the loss of limbs in the event of a crash. Having an arm out of the window also poses a risk to other road users such as cyclists and motorcyclists. Being able to put your head out of the window implies that the seat belt is not worn correctly. If your body parts are not within the safety cage of the vehicle, then you are at risk and are risking others.

Arms extended from the vehicle may also confuse other road users who might think that you are giving hand signals, thus posing a risk that those drivers may incorrectly react to what they think you are gesturing. Visibility may also be obscured as a result, blocking the vehicle´s mirrors and making it difficult to observe the vehicle surroundings correctly.

Even within the vehicle there is a serious risk of injury if you are not sitting correctly. An all too common sight in the summer months is a car passenger with their feet up on the dashboard, a practice that is not only illegal, but is extremely dangerous.

In the event of a crash, if a passenger is travelling with their feet up on the dashboard, the injuries that may occur will be very serious, partly as the deployment of the airbag can cause more serious injuries than it prevents in this situation, and, irrespective of an airbag being present, the glass from the windscreen can cause serious injury, not to mention the effects of a passenger being crushed by the impact between the dashboard and the seat.

In addition to the increase in occurrences of this sort of behaviour, there is also an increase in the number of fines issues as the traffic police try to not only advise drivers of the problem, they try and enforce remembrance through the issuing of fines. Incidentally, in the event of a passenger putting their feet on the dashboard, it is the driver who is ultimately responsible for the safety of the vehicle and, as such, it is the driver who will be fined.

Article 18, Section 1 of Royal Decree 1428/2003 of 21 November, approving the Rules of the road, states that “The driver of a vehicle must maintain their own freedom of movement, the required field of vision and permanent attention to driving, to ensure their own safety, that of other vehicle occupants and other road users. To achieve this, you must take special care to maintain the proper position and that of the passengers, and the proper placement of objects or animals transported so that there can be no interference between the driver and any of them“.

Keeping both hands on the steering wheel, not leaning with an elbow on the window, keeping your arms inside the vehicle may have been the repetitive messages our driving instructor taught us when we first took lessons, but the advice is still very much key to a safe driving experience.

Offence: Failing to maintain the proper position in the vehicle.

This can refer to passengers with their feet on the dashboard, drivers with their arms out the window, or any other situation where proper posture is not maintained.

Reason: There are many reasons why this rule is important. For example, in the event of impact, the injuries sustained by a person with their feet on the dashboard are nothing less than horrific. The same goes for instances where limbs have been lost or severely injured on account of them protruding from the vehicle. Plus, the seats in a vehicle are designed to give maximum protection, and comfort, and not being correctly positions poses a risk, and can hinder visibility by the driver.

Seat belts are designed for one purpose only, to save lives. Statistics show that by wearing a seat belt the probability of death when involved in a collision is halved, whereas according to the data from the Dirección General de Tráfico (DGT) and the Instituto Universitario de Tráfico y Seguridad Vial (INTRAS), the risk of death is cut by a staggering 77% in an overturned vehicle.

However, for the seat belt to be effective, it must be worn correctly, for it to fulfil the function it is designed for fully.

The correct way to wear the seat belt is for it to go across the torso diagonally, and across the waist, firmly secured in these positions. The top part must be on the hard part of the collarbone, halfway between the shoulder and the neck. The lower end sits against the hardness of the pelvis.

The three-point seat belt, which is fitted as standard to most modern vehicles, has an upper (thoracic) and a lower band (pelvic). Both must be snugly fitting against the body. For the seat belt to offer maximum protection it must be on the hard parts of the body, leaning against the collarbone, halfway between the shoulder and neck at the top, and the iliac crest of the pelvis, never on the abdomen.

Accessories such as cushions or other additions should not be used. Once you have pulled the seat belt across your body and secured the strap in the locked position, make sure that the seat belt is not twisted at any point. If it is, undo the seat belt and remove the twists. Once secure, pull the seat belt so that it fits snugly against the body, with any slack being taken back at the top.

If the seat belt is not worn correctly, it can cause further problems in the event of a collision. For example, if the upper band is taken off the shoulder, it can cause a head impact with the windscreen, dashboard, or seat in front. It can also produce cervical lesions.

If the belt is not firm around the body it can cause the vehicle to slide under the belt, casing lower body and spinal injuries. This is often referred to as the “submarine effect”. To prevent “submarining”, the vehicle occupants must also sit in a proper position when riding in the vehicle, with the seat belt securely fastened as mentioned, and without having any additions such as pillows or cushions which may contribute to the reduction of effectiveness of the seat belt.

It is also important to remember the one seat belt – one seat rule. All vehicle occupants are obliged to wear a seat belt, both in the front and the back seats. Some vehicles only have two seat belts in the back for example, and so that vehicle can only carry two passengers on that seat.

There are other rules regarding children in cars. Primarily, children under 1.35 metres in height are not allowed to travel in the front seats and they most use an appropriate restraining system for their height and weight.