December 07, 2022
Home F.A.Q. How to distinguish different roads in Spain

When we drive around in a different country, such as Spain, it´s quite common that we program the GPS, start the car and start our road trip to our holiday destination, be it coastal, urban or even outside of Spain, then, during the journey, the navigator tells us to continue along the E-90 road, for example, but the signs on the road refer to the A-5 and we end up going crazy. What type of road is the E-90? Have we got confused on the way?

The thing is, don’t panic, chances are you are actually going in the right direction. The roads identified with the letter E followed by two or three numbers are none other than those that are part of the European road network, a project based on the entire continent as if it were a single territory to designate, with no interruptions in between as borders or natural barriers, all the roads that cross Europe from side to side. They are managed by the United Nations Economic Commission for Europe (UNECE) with the aim of globally identifying each route.

In countries such as Spain, but also Germany, this nomenclature is located next to the country’s own code for the same road, which is why we sometimes see different numbers on the route, while in other nations such as Sweden, only the European numbering is used.

Therefore, in Spain, on some signs on the road, be it on the autovía or autopista, which are different types of motorway, but crucially the same, the E-XX sign with a green background is seen next to the already known A-XX or AP-XX with a blue background. They are always identified with the letter E (for Europe) and if they are followed by two numbers, they are class A roads, while if they are followed by three, they are class B. 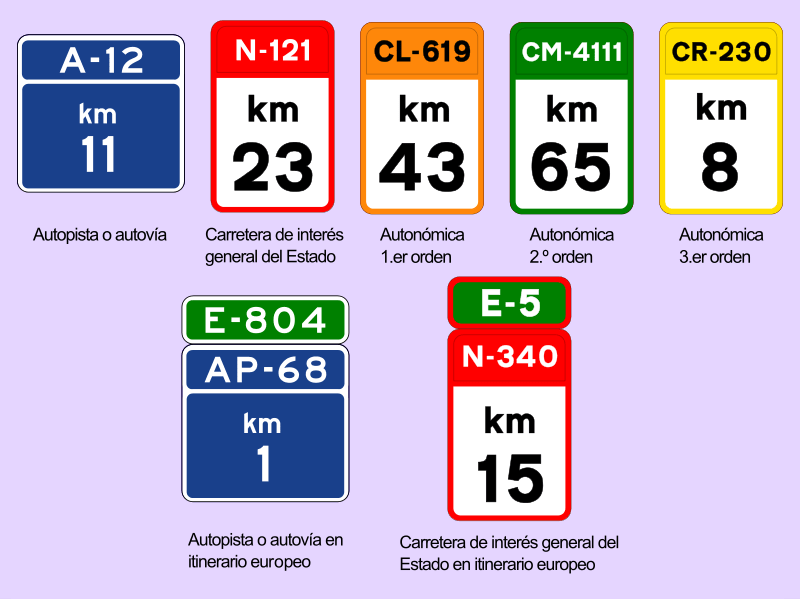 In Spain, there are various codes for the different highways, high-capacity roads and other routes that serve to control the network and keep it fully identified, something useful not only in the event of being in the middle of a trip, but also when suffering from some type of incident and it is necessary to recognise where we are.

The identifying signs will have a letter as a prefix, then numbers, and will have a different coloured background. Green, as we have mentioned, refers to the European route number, and the prefix will be “E”. Blue is for motorways. A red background indicates it is part of the national road network, and the prefix in this case will be “N”, indicating national road, such as the N-332. The numbered signs with a brown background are those under the control of a regional body, such as the CV-905, the CV being indicative in this case of the Communidad Valenciana. There may also be other green-backed signs, again in this case with the regional prefix, which are second level roads under the control of the regional authority. Finally, yellow-backed numbers are third level roads under the control of the regional body.

The blue signs will have the letters A and AP that indicate, on the one hand, the autovías, which are motorways or high-capacity roads managed by the State, and, on the other, the autopistas, motorways which are sometimes managed by private operators and on which you sometimes, but not always, have to pay a toll. Sometimes, the sections of highways or motorways that bypass cities are also identified with the letter that refers to the city, such as the M-30 or M-40 in Madrid.

Then, there are the national highways, always denominated with the letter N followed by the corresponding numbering with a red background. From this level is when the first, second and third level roads begin to be named with orange, green and yellow colours.

The first ones are the most important highways of the autonomous community in question, the second level roads are also often referred to as provincial roads and the last ones, third level, as local ones. These roads usually have a single lane for each direction, they are found connecting towns or small towns that are not reached by high-capacity roads and do not have the characteristics of the former.