“In Spain we Drive on the Right” might seem like an obvious thing to say, as it makes the point which we hope is quite clear, in Spain we do indeed drive on the right, but the law goes much further than that, in fact, the General Traffic Regulations leave no room for doubt, “Drive in the right lane whenever possible”.

We are actually going to talk a little bit about not driving in the correct lane. The law is quite clear, if a road has more than one lane, the additional lanes, perhaps central or on the left, are only for overtaking or for when the traffic/road circumstances make it advisable, as long as the progress of another vehicle that follows is not hindered. Once the overtaking manoeuvre is complete, you must return to the right-hand lane, the normal driving lane.

However, thousands of drivers in Spain abuse the centre lane every day or suffer from the so-called left lane syndrome. It is one of the most frequent traffic problems in the country and is presumed to be as a result of a general lack of driver education.

The DGT regularly draws attention to the problem of “hogging” the left or the central lane, either through campaigns, with the luminous panels of the road or through social networks. 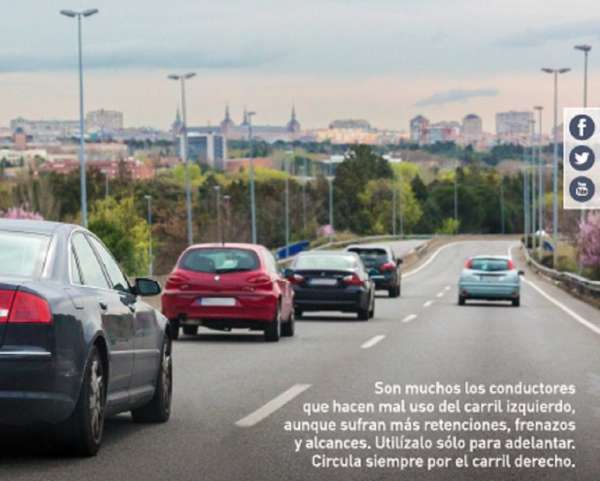 It is enough to drive for a few minutes on any Spanish dual carriageway or motorway to verify that driving in the wrong lane, the overtaking lanes, is common practice. But it is even more common on roads with three or more lanes.

There are people who have excuses of all kinds to justify driving in the left or centre lane. Potholes on the right side of the road, exclusivity of trucks and slow vehicles to circulate in the right lane, driving at the maximum speed of the road and state that no one has the right to overtake them because the speed limit cannot be exceeded, remaining in the central lane so as not to disturb those who join and leave the road, etc. But absolutely none of these excuses have foundation.

Of course, when traffic/road circumstances make it advisable, there is no problem in using these lanes. But they are exclusively for overtaking, not for driving.

Driving in the centre or left lane triggers problems and very dangerous behaviours. To begin with, the movement of the rest of the vehicles is hindered. If a car is constantly driving in the centre lane while the right lane is empty, another car driving correctly and wanting to overtake it must make more lane changes than necessary, both to pass it and to return to the right lane.

Abusing the central lane hinders circulation and is synonymous with slow traffic. Believe it or not, this is the reason for many of the traffic jams that take place on our roads every day. Road traffic experts maintain that if everyone circulated correctly, the flow of traffic would be much greater.

Another problem is that driving in the middle or left lane triggers other dangerous behaviours. The most common has to do with the safety distance.

Seeing that the vehicle in front does not circulate on the right when that lane is free, some drivers consider it appropriate to carry out a campaign of harassment against the vehicle that circulates incorrectly to pressure its driver, to move aside and continue their journey without disturbance. It is even more serious when the driver of the vehicle behind asks to pass with the left turn signal, high beams or horn. The behaviour of both drivers in these cases is unfortunate and very dangerous.

Another of the behaviours that generates the abuse of the central and left lane is that of overtaking on the right. Under no circumstances is it allowed to act in this way. It carries a fine of 200 euro and the withdrawal of four points from the licence. It is clear that dealing with drivers who have left lane syndrome or who abuse the centre lane is exasperating for all those who drive well, but you should never overtake on the right.

Road safety associations continue to call for more action from the DGT and traffic police for this type of behaviour, with more surveillance and fines being issued, but also for better driver education.

In Spain, we do indeed drive on the right, but we must remember that on roads with more than one lane, that notion still applies, which is why the right-hand lane is considered the normal driving lane.

Incidentally, although in the UK they drive on the left, the same concept also exists.