The General Directorate of Traffic has published an instruction defining the new warning sign for the danger of blind spots in passenger and freight transport vehicles. 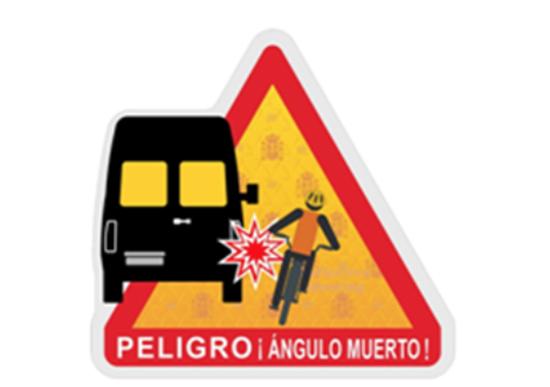 Its objective is to warn vulnerable users of the danger posed by being in any of these non-visible areas when they approach, in order to avoid risks.

This sign is a first measure framed in a set of actions that are being adopted in the European Union to reduce the risk of accidents by improving the visibility of the driver in delivery vans, buses and trucks. The ultimate goal is to get a direct view of these drivers, but until advanced driving assistance systems (ADAS) are incorporated into all vehicles, the option of signalling on the vehicle itself, alerting to the existence of blind spots can be useful to prevent accidents.

The signs must comply with the design and technical requirements defined in the instruction, to ensure maximum durability and visibility. They must be marketed through authorised establishments that are registered as licence plate handlers.

They shall be positioned so that they are visible in all circumstances and in such a way that they cannot obstruct the visibility of the vehicle’s regulatory plates and inscriptions, the visibility of the various lights and signalling devices and the driver’s field of vision. The instruction details the number of signs to place and the position depending on the vehicle.

The reasons that have led the General Directorate of Traffic to create this new sign have been the following:

In 2020, 153 pedestrians, 134 motorcyclists, 21 bicycle users and 7 personal mobility vehicle users died on urban roads, of which a high percentage of accidents with fatalities and serious injuries occurred among vulnerable users and commercial and heavy vehicles.

Change in urban mobility and therefore in road safety:

Increased mobility for pedestrians, cyclists, motorcycles and new forms of mobility such as VMP in cities.

Increase in the traffic of commercial and heavy vehicles due to the growth of logistics activity, electronic commerce deliveries, which in some cities reaches 25% of the circulating vehicles.

The aging of the population. 70% of the pedestrians who died in the city were over 65 years old.

It is in line with similar initiatives in the process of being implemented in other European countries such as France, the London Metropolitan Area, and various states of Germany.

It is a first measure of a set of actions under study that are being analysed both at the European level, in Spain and in local administrations, to reduce the risk of accidents by improving the space and the quality of the driver’s vision in commercial vehicles.

Collaboration between administrations and the private sector

The creation of this sign has been the result of work between administrations, since from the first moment, there were several municipalities such as Barcelona, ​​Madrid, Zaragoza and Logroño and the Metropolitan Area of ​​Barcelona (AMB), -supramunicipal administration of the metropolis of Barcelona, ​​which is made up of 36 municipalities – that have worked together with the DGT to design the sign.

In parallel, it has also been working with UNO (Logistics and Transport Business Organization) CITET (Innovation Centre for Logistics and Freight Transport) and AECOC (Association of Manufacturers and Distributors) for the implementation of this sign and for other actions to be carried out shortly in relation to the urban distribution of goods.