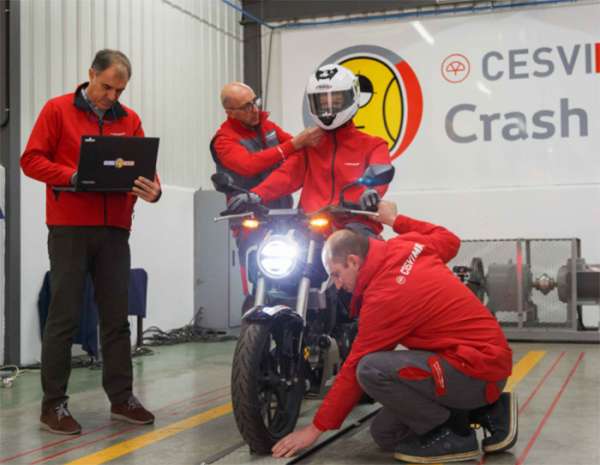 As well as not wearing the helmet correctly – wearing an inadequate size, not fastening it, or adjusting it correctly -, which causes 6% of deaths in motorcyclists and 29% in moped drivers.

These are the main conclusions of the report ‘Roadmap for improving road safety in motorcycle and moped users’ , prepared by Fundación MAPFRE and the Spanish Road Association (AEC), which analyses 240 deaths in motorcycle and moped accidents and more than 7,000 injuries suffered by 3,200 riders and passengers of these vehicles in accidents that occurred between 2016 and 2019.

The research reveals other relevant data: the vast majority of the deceased are men (95%), who lost their lives mainly on weekends.

“This disproportion between the sexes is very striking, it should make us reflect on the driving style” , points out Jesús Monclús, director of Prevention and Road Safety at Fundación MAPFRE.

In addition, the majority of fatal accidents occurred due to exits from the road (41.3%), frontal collisions (16.8%), typical of intersections, and falls (15%).

The use of other protective elements -airbags, jackets with protection, gloves and special boots …- are more common on the road (71%) than in the city, where only 25% of the deceased used them.

The investigation also indicates that in more than half (52%) of the fatal accidents there were no other vehicles involved. And when there was, the accident occurred mainly because their drivers did not respect the priority (21% of the cases), or suffered some distraction or did not see the motorcyclist (10%).

The report also includes the proposal to create work groups to investigate accidents, which analyse each fatal accident and draw up recommendations to prevent this type of event from being repeated, “as has been done for years in other countries safer than Spain, like Sweden”.

It also emphasises the need to improve the training of all riders, including those who start to drive small-cylinder motorcycles with their car license (class B), and of professional motorcyclists, especially delivery drivers:

“They should receive safe driving courses, in particular to improve cornering and intersection driving, and emergency braking.”

The study also raises the need for more practical training for all drivers, through specific awareness sessions, risk perception, safe decision-making and the need to share the road, which are moderated by victims of traffic accidents.

And finally, it emphasises the need to promote protective equipment to better protect the parts of the body most affected in accidents (spine, hands and feet); to incorporate more safety technology as standard in all motorcycles and mopeds, such as the emergency call system and ABS; and to improve the roads with protective barriers, which are compatible with the safety of these drivers and which avoid frequent tragic situations such as the amputation of lower limbs.

More accidents in the city, more mortality on the road

The Fundación MAPFRE report on the accident rate of motorcyclists highlights that the number of deaths on motorcycles and mopeds has decreased less and has even increased compared to the number of car occupants in recent years.

The research highlights that the fatal accident rate of motorcyclists increased in 2019 by 16% compared to the previous year and that motorcycle drivers now represented 20% of all deaths, despite the fact that motorcycles are only 10% of the total fleet or that only 4% of the permits are for motorcycles.

“It is very striking that one in four deaths in Spain is a motorcyclist. This did not happen 10 years ago, when the percentage was approximately 20%,” said Jesús Monclús, Director of Prevention and Road Safety at Fundación MAPFRE, who also insisted that “we cannot criminalise motorcyclists: A kilometre on a motorcycle is 17 times more dangerous than in a car with respect to fatal injuries. Therefore, on a motorcycle we should be 17 times more protected.”

In addition, the greater presence of motorcycles may also be another explanation for this increase in the accident rate: since 2009 the number of motorcycles has increased by 38% in Spain, by 12% in the case of passenger cars.