Choosing advice rather than a change in the law, one of the Spanish Government’s suggestions for dealing with the accelerating price of motor fuel was to suggest that we all slow down. However, as recent evidence proves, the opposite has actually happened, and motorists are actually speeding more.

The DGT has carried out a speed surveillance campaign earlier this month, which is where the evidence that cars are going faster has come from, when compared to the same campaign from a year ago, when there was peace in Ukraine and if you paid for ten litres of fuel with a 20 euro note you would still get a fair bit of change back.

The campaign that demonstrates this has been carried out through 2,274 control points, 351 more than last year at this time. And as incidents on highways and motorways are increasing, 54.4% of the controls have been carried out on this type of road.

Of the 747,303 controlled vehicles, 42,202 were going faster than they should have. That is, 5.6%, when last year, with much cheaper fuel, they were 5.2%. And with regard to the type of road, 6.2% travelled very fast on conventional roads, while 5.2% travelled on dual carriageways or motorways.

There were even 5 of them that exceeded the maximum speed allowed by more than 80 km/h, which is considered a crime against road safety and ended with the offenders being brought to justice at court.

We remind you that fines for speeding are classified as serious or very serious offenses and are sanctioned with fines from 100 to 600 euro, and with the removal of between 2 and 6 points.

Although it doesn’t explain the reason for the increase in the number of speeding drivers, one explanation for those being caught could simply be that the driver didn’t know the maximum permitted speed on the road, as the results of a recent survey by Fundación Línea Directa revealed. It would appear fact that a number of drivers lack knowledge about speed limits in Spain.

The study ‘Speed, a silent scourge’ has shown, the vast majority of drivers on Spain’s roads are “not well aware” of the limits. It is true that there have recently been changes, but knowing this information is of vital importance when driving safely on our roads.

Incredibly, 94% of the drivers surveyed by Fundación Línea Directa did not know the speed limits currently in force well, which means that a scant six percent do know them, or at least claim they do.

The most confusing limits appear to be those that affect speed in the city: 89% of those surveyed failed to describe them accurately. It is true that these are the most complex (and even more so with the recent changes that have barely been completed for a year), but even 50% fail on interurban roads and up to 35% do not know the current ones on motorways.

The correct perception of speed limits is a factor of vital importance in driving since an incident in which speeding comes into play multiplies the chances of becoming fatal by seven.

The generic speed limits in Spain are quite clear: 120 km/h on motorways (unless they run within towns, in which the limit will be 80 km/h), 90 km/h on conventional roads (except in those with physical separation between the two lanes, in which case the limit MAY be increased to 100 km/h) and 50 km/h in the city, although in the latter case with many roads where you cannot exceed 30 km/h (on roads with a single lane in each direction of traffic) and even 20 (on roads that have a single roadway or no pavement platform).

These generic limits may vary in those sections where a vertical sign reduces the maximum speed allowed (on a motorway we can have a 100 km/h zone if, for example, there is a dangerous curve). In addition, it must be remembered that since the last reform of the Traffic Law, the margin of 20 additional km/h that drivers had to overtake is no longer in force.

Exceeding the speed limits is severely punished and, depending on the excess registered by the DGT speedometers, it will be considered a minor, serious or very serious infraction. Thus, the fine will increase both in terms of points and money … and can even lead to prison sentences if the conduct reaches the level of a crime against road safety.

The economic fines will range between 100 and 600 euro and the loss of points can vary between two or six (although there are also minor violations of the limits, which do not entail loss of points).

If the road limits are exceeded by more than 60 km/h in the city or 80 km/h on the motorway, it will be considered a crime against road safety. In this case, a judge will rule whether the punishment is prison sentences of between 3 and 6 months and withdrawal of the driver’s licence for between 1 and 4 years. Other penalties are also contemplated, such as work in favour of the community (with a duration of between 31 and 90 days) or even economic fines of between 6 and 12 months, at a fixed amount for each day. 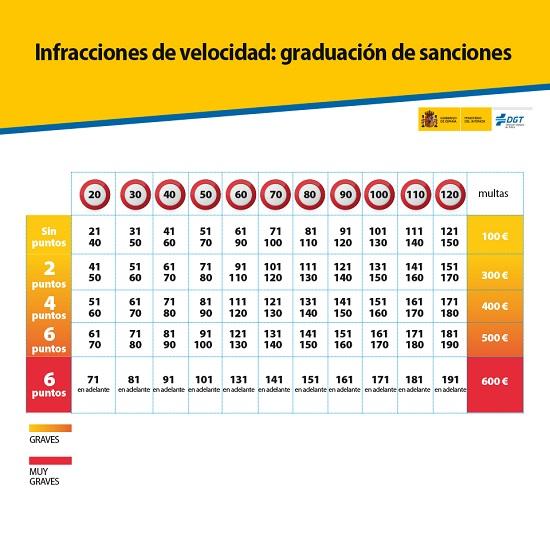